Author of "Born to be Brothers"

Editing in This Blog

Yes, you'll find editing errors in this blog. However, I do this for fun, and don't care to get into, what is for me, the onerous part of writing - serious editing.

So, if you see something you know is incorrect but not destructive on a planetary scale, let it go. Okay?

If I find errors in your blog, I'll do the same for you. See how easy it is to get along?

How to Write Battle Scenes

How to Write Battle Scenes
By C. Patrick Schulze

Listen to a podcast of this article here.
There are two basic types of battle scenes. There is the one where an individual combatant engages in a fight. There are also those epics where generals maneuver grand armies over the countryside. Though both of these scene types have great similarities when it come to your writing, today we’ll discuss a scene in which one or a few soldiers is involved. 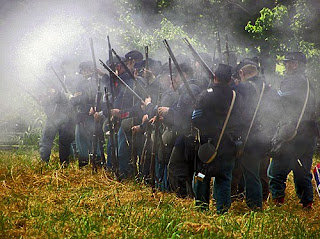 Battle scenes are unlike other scene types as they have a trickier side to them. They utilize a different construction and fewer words to move them forward. These scenes are all about speed, strength and emotion.

However, as with any scene, it must have meaning to the story and move the storyline further toward its conclusion. Does the battle offer a plot twist perhaps? Does it help the hero grow? Might it enlighten your reader to more of your hero’s personality? Like all writing, these scenes should also utilize your characters’ five senses. And don’t forget about point of view either. It is as critical in battle scenes as any other. For example, how effective would an ambush be if the hero knows it was about to occur? Of course, this part of your novel must be well-written, punctuated with accuracy and all those other things novels require.

Write only about the action and trim out everything not related to the moment in time. In battle scenes you’ll employ fewer words than with your normal writing. Adverbs will become quite scarce as will adjectives. Also, search out specific nouns and verbs. You’ll find great command over your words if you choose that unique verb or noun for the situation at hand. For example, soldiers don’t “run” across a field, they “charge” or “rush” or “dash” across it.

The use of emotion is THE component you need to emphasize in writing battle scenes and you should employ all your powers of persuasion at this time. Though James Bond or Patton may be your exceptions, your characters are not indifferent to combat. Even your heroes will be utterly terrified. And consider the emotions of those at the home front. If you fail to bring their feelings into play, you’re missing a powerful plot point.


One powerful tool at your disposal is sentence structure. Your sentences should imitate a sword fight; furious, short and brutal. Long passages slow down the novel, whereas short, choppy ones increase the pace.
Dialogue is another tool that can enhance, or destroy, your action scenes. First of all, you should work for a bit of realism here, so please, no snappy comebacks. Keep your characters’ dialogue to the point. When a soldier is under fire, he’s not joking to his buddies about a YouTube video he saw last night. Nothing is on his mind other than the events swirling around him.

Now for some general tips.

Remember, this is a novel, not a flicker show. Though the slashing sword is important, the character’s reaction to that event is more so.

Insure your villain is worthy. Nobody’s impressed when your hero fights a challenger who is without adequate weaponry.

Don’t write about David and Goliath. That one’s been done.

Whether writing fiction or nonfiction, large battles or single combat, draw a map of your battlefield. It need not be of high quality, but you’ll be surprised as to how much this can help. Use photos of sites whenever possible. I travel to the actual battlefield where my combat occurs and take photos. I then place them on my screen when I write my battle scenes and refer to them often. You’ll be amazed how something as slight as a slight rise in topography can come into play in this type of writing.


When men are wounded, only four thoughts crowd their minds; what parts are missing, will they die, water and family, not necessarily in that order.
In a fight, if someone receives a minor wound, he doesn’t stop to look at it, touch it and study the blood on his fingertips, show it to his enemy and scowl, step back, retake a fighting stance and egg on his opponent with a flip of his fingers. The instant he looks down, he’s dead. That’s it. Keep it moving.


Adrenalin and panic can overcome only so much. Minor injuries won’t be noticed, more serious injuries will stun a combatant, if stop him. Characters run out of breath, they bruise, they bleed. Write to the realism.
Well, I could go on and on about this as battle scenes are my forte, but for the sake of word count, I’ll stop. I do hope you’ve picked up something of use to you.

You know by now I wish you only best-sellers.